This article is a stub. You can help Larva animation Wiki by expanding it.
Ice Cream is a 1st episode on Larva series

This episode begins with 2 of these main characters that we've meant, The yellow tall larva name is "Yellow" and the red small/short larva's name is "Red" who lived in the sewer, feeling bored today in a grate. Suddenly, the coin lands on Yellow's head, and he falls down & gets dizzy & seeing stars. Red laughs at Yellow. But then, the piece of ice cream drips on Red's head, comes the vanilla ice cream. Red shakes head, trying to get off the piece of ice cream off his head but he failed, some smallest pieces of ice cream's lands all over on Yellow's nose, & he licked it. He then pulls the delicious cream off Red's head. After that, he started kicking Yellow but he can't stop shaking his head. Yellow smiles at Red who glares back at him. Just then, another blob of ice cream falls into the sewer, Red & Yellow both want it, but Red refuses to let Yellow have it. He then tries to lick it but Yellow slurps it up, kissing his lips, Red then yells in disgust, crawls all over the place and then furiously faces Yellow. He then flees for his life while the angry Red gives chase. As Red kicks him, a ghost slug named Violet pops out of the ground. A drop of ice cream falls on his head as Red finishes beating up Yellow. He then glares at the defeated Yellow and then tries to lick the ice cream off Violet, but he bursts out of the ground before he can do so, he then licks the ice cream off his head and faces Red, who nervously smiles at him. Another drop falls onto Red's head, realising what's going to happen to him, Red then unhappily faces the camera and Violet opens his mouth, uncovering his sharp teeth and in the old credits, Violet can be heard slurping the ice cream while Red screams in pain.

1. Yellow gets a coin dropped onto his head.

4. Yellow gets kicked again by Red and knocked out unconscious by him.

5. Red is bitten by Violet. (not seen, but is bandaged in epilogue) 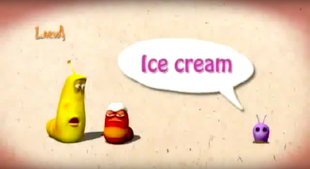 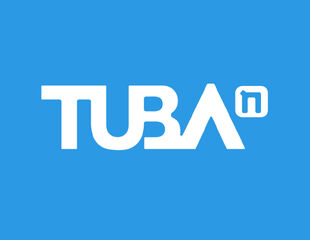 Add a photo to this gallery
Retrieved from "https://larva-animation.fandom.com/wiki/Ice_Cream?oldid=12110"
Community content is available under CC-BY-SA unless otherwise noted.