Red is the protagonist from the Larva series. He first appeared in "Larva Pilot (Before Ice Cream)", alongside with his friend, Yellow, and Friends. Red is very cocky and often seen hurting Yellow, Red usually ends up hurting himself instead. thank u.

During the series, Red always shows to be mean and rude to Yellow as he steals food from him and hits him back when he accidentally injures him.

Despite this, Red really cares and loves Yellow as a friend and brother.

Red is a small larva/caterpillar. His body is red with orange stripes on his abdomen. He has three strands of hair on his head and his eyes are reddish brown.

Red is very self centered throughout the show and often abuses Yellow despite him trying to be nice. In Larva Island, he seems to become less selfish and a little more caring towards others.

Yellow is the best friend of Red. Their relationship is neutral. Throughout the episodes, Red shows to be cruel, deceptive, and offensive towards him. He usually physically abuses him whenever he annoys him and steals his food or other belongings and claiming it all to himself. He also tries to flirt and steal Yellow's girlfriend, Pink, which actually irritates her. However, Red shows to be loyal and caring towards Yellow at times. They always cooperate and work together at times, such as the episodes in "Ice", "Larva Car", and "Sweat". In the episode "New Friend", Red shows jealousy of Yellow's "new friend" and shows that he has regretted his cruelty towards Yellow and feels excluded from Yellow.

Brown doesn't seem to like Red much in some episodes. In Brown's debut, he smacks Red for pulling his dung ball away from him and puts dung in his eyes. In "Snowball fight", Brown teams up with Black, Blue and Rainbow in order to get the candy Red and Yellow were defending. In "Laughing", Red laughs at Brown every time he lands his backside on the sharp rock and in "Missing", Brown throws several pieces of dung at Red when he vertically slices his dung ball in half.

Mango is the love interest of Red in Larva Island. He first meets her when she heals him of a poisonous mushroom. 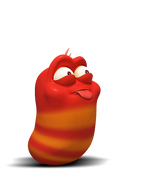 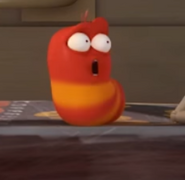 Add a photo to this gallery

Retrieved from "https://larva-animation.fandom.com/wiki/Red?oldid=11900"
Community content is available under CC-BY-SA unless otherwise noted.